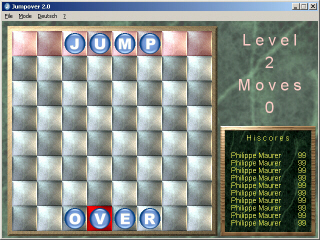 In 1991 Philippe Maurer (Daph-Soft) and Jan Weber (PEGA-Soft) realized her game idea in form of a computer program and developed the first version of the solitaire game "Jumpover". The game is played on a 8x8 playing field. The objective is to move the 8 stones from the initial position in as few as possible moves to the base line. Its possible to move either diagonal, vertical, horizontal or to jump diagonal, vertical, horizontal. There exist different levels, which differ by the initial position. Moreover the levels can be created by yourself. Mathematical speaking, there exist 4'426'165'368 possibilities to design the playing fields. To make a long story short, you never will be bored. In the extended version the stones hold the letters of the word "Jumpover". Its necessary to move the stones so to the base line (reddish zone), that the word in question can be read. In the license version, the levels 1-130 are at your disposal. The levels 131-200 can be created yourself. In the trial version you can enjoy the first 5 levels and edit the levels 131-135.

Order the license key of Jumpover 2.0 at our partner share-it!