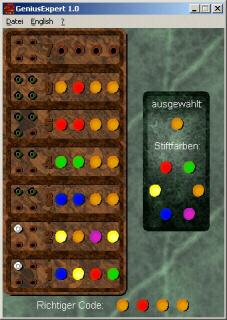 For a long time combination games have been very popular. For instance in 1963 the game Egghead ("What’s That on My Head?") by Robert Abbott’s was released. In this game one player has number cards on his head, he can’t see himself. By asking clever questions, he has to find out the values of the cards on his head. A similar idea was pursued with the game Mastermind (also known as "Crack the code!"), which was invented in 1971 by an Israeli telecommunication expert named Mordecai Meirovitz. Since the 30 December 1980 it holds the U.S. patent number 4‘ 241‘923. The sense of this game is to guess a secret color code in as few as possible guesses. In 1986, Alex Randolph developed the game Code 777, which represents an enhancement of Egghead. Each player receives 3 cards in different colors, which are numbered from 1-7. All players except for the player holding the cards, can see the cards of the others. Using question cards, each player has to find out his own card code.

Order the license key of GeniusExpert at our partner share-it!