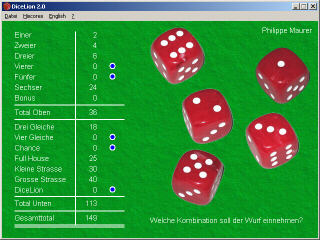 DiceLion simulates the famous 5 dice game of luck and strategy, also known as "Yatzee", "Kniffel" or Dice Poker. The players alternately roll the dices and try to score the roll in one of 13 categories. After a maximum of three rolls, the player has to decide, at which combination the roll should be scored. At the second and the third roll, the player has to decide which of the five dices should be re-rolled. Each combination can only be scored once. In the case no useful combination was rolled, it must be decided which combination should be scored with zero points. The player with the highest number of points, wins the game.

Order the license key of DiceLion 2.0 at our partner share-it!